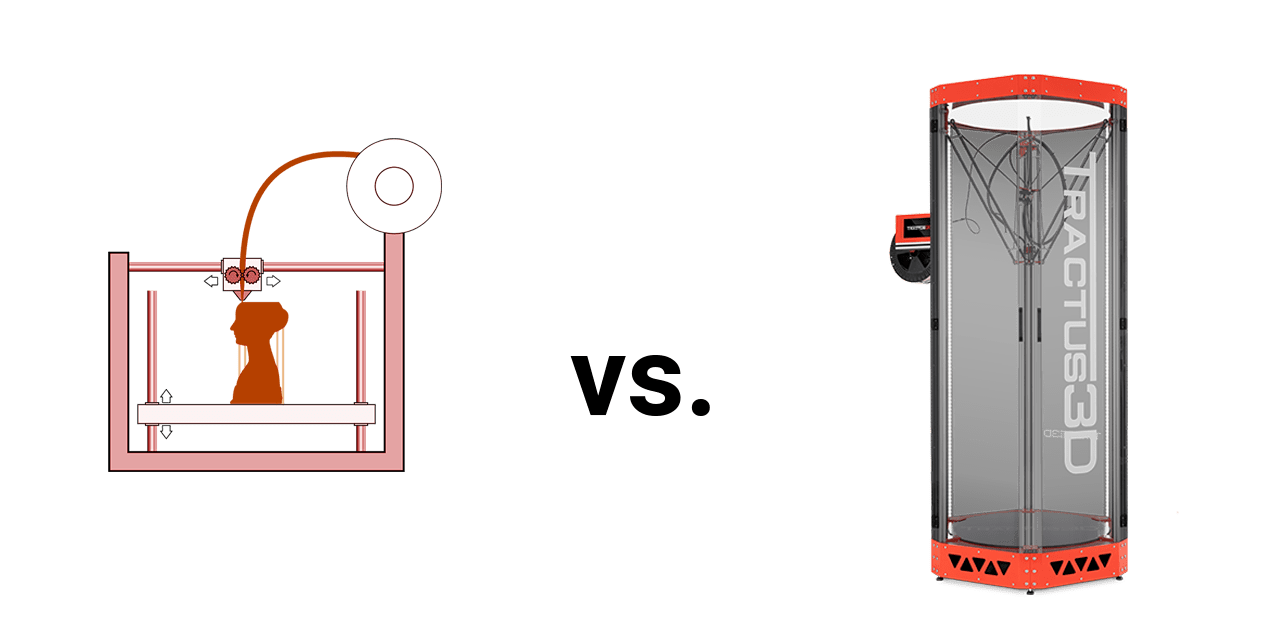 The 3D printing market is quite competitive and each printer has its own 3D printing technology and unique capabilities, so it’s important to know which printer is most suited for the results you want to achieve. As most 3D printers, Tractus3D printers use the FFF 3D printing method (also known as FDM 3D printing), which means everything is printed layer by layer using filament.

In the FDM 3D printing technology, two types of printing systems can be distinguished: Cartesian and Delta. The biggest difference between these two systems is the method of moving. Because each system has its own way of moving, you will achieve different results.

First more about the FDM technology

With FDM 3D printing technology, the extrusion nozzle moves over the build platform horizontally and vertically. Thermoplastic material is heated to its melting point and then extruded, layer by layer, to create a three dimensional object. Each of these layers can be seen as a sliced horizontal cross-section of the eventual object. Once a layer is completed, the base is lowered to make room for the next layer of plastic. Once an object comes off the FDM 3D printer, its support materials can be removed.

In FDM 3D printing technology, there are two types of printing systems: Cartesian and Delta. The biggest difference is the method of moving. We will explain…

Delta 3D printers also use the Cartesian coordinate system, but do not use linear-motion tracked movement to deposit the filament. Instead, they use three arms, each consisting of a parallelogram. They also move from one X or Y point to another, but do so by changing the angles of these parallelograms. The arms of a Delta 3D printer hang down from a fixed platform. All of the mechanics that drive the motion of the arms are located in that platform. As a result, the print head of the Delta 3D printer is a lot lighter than if it also had to contain motors for movement. This reduced weight leads to reduced inertia. By reducing the inertia, particularly at the end of a movement, the production head is able to respond quickly, while retaining its accuracy.

A Delta 3D printer usually features a circular print bed, which is immovable. Due to its circular print bed, the natural shape of a Delta printer is a circle. Therefore, rectangular objects tend to be rather small in comparison to a Cartesian 3D printer. What a 3D Delta printer excels at, in comparison to the 3D Cartesian printer, is its capability to build tall objects. Especially the highest point of the print can be made exceptionally accurate. It is also fairly easy to make them bigger, especially in height, due to their design. With an overall less complicated construction and less parts to be used, it reduces maintenance and costs. If you do not have/need a lot of horizontal space, but instead want to build a lot of layers on top of each other (vertical), then you should definitely consider a Delta 3D printer.

Its downside comes in the fact that a Delta 3D printer must be much taller than its build volume, due to the arm construction of the machine. This is why you will generally need more space to place your printer than you would with a Cartesian 3D printer.

Cartesian printers owe their name to the Cartesian coordinate system they use, which was invented by Rene Descartes. They don’t just function based on an X and Y coordinate system, but also drive the print head on a mechanism that travels linearly on both the X and Y axis.

Cartesian 3D printers see their downside in the fact that their moving parts are quite heavy. Because of this, it is hard for a Cartesian printer to stop or change direction in an instant. The constant jerking of the platform can lead to prints coming loose and to inaccurate prints, especially when the prints get higher.