3D printer resolution – what does it really mean?
learn-3d-printing , knowledge-about-3d-printing

3D printer resolution – what does it really mean?

If the 3D printer resolution is set to 200 microns and we want to print 2mm height over a distance of 10 cm, it would mean we need 10 layers in order to achieve the desired height .

However, if printed at 100 microns, it would mean that there would be 20 layers used to create the height of 2mm and that would mean 0.1mm step between each layer and a smoother surface delivering a better-looking acute angle.

While the 3D printer resolution is very important, you also need to use the best material for your design. Even when you have the most accurate 3D printer on the market, it’s possible that there’s a slight deviation. It might be too small to spot with the human eye, but it might make the difference between a functional print and one you can’t use. Therefore it’s important to know that there are three types of possible deviations when we speak of the 3D printer resolution: machine-, material- and end result deviation.

Manufacturers of 3D printers can only promise that their machine resolution is what they claim it is. Therefore they advertise with this factor, as do we. The accuracy of our 3D printers is 10 microns, which we’re very proud of. However, it is normal that there is a possible deviation on the Z axis, as gravity pulls the material down. Therefore, we differentiate the resolutions of the X and Y axes (2D) and the Z axis which makes it 3D.

While the 3D printer resolution of the X and Y axes is easy to pinpoint, the Z axis falls victim to gravity. When printing in height, gravity can cause more material to come out of the printer than is intended. Therefore the 3D printer resolution is often a bit lower than is said on a manufacturer’s website. As stated, the accuracy ofTractus3D printers is 10 microns on the X and Y axes. On the Z axis we recommend not printing below 50 microns to make sure your prints are as you desire.

The material can play a significant role in the resolution and outcome of a print. Every material is different and will shrink in its own way and this occurs when it turns from a fluid to a solid – also known as warping. The contraction process takes place when a synthetic material starts to cool down and this can cause the print to bend from the build plate. Of course, as mentioned, each material is different and some will shrink more than others such as PC, which shrinks more than PLA. Therefore, to avoid this, you should ensure that a heated build plate is used, which ensures that the object does not solidify quickly. At Tractus3D, our printers also come with a heated build plate and closed chamber which ensures prevents temperatures from fluctuating, as the warmth is not released.

How can you test the 3D printer resolution?

It is important to test the resolution of the 3D printer, so that you can determine the geometrical features that play a part in the outcome. 3DBenchy is used as a way of testing and benchmarking 3D printers. The 3DBenchy is a little boat that has been designed to print at a scale of 1:1 without support material. This makes it possible to look at the different surfaces of the model in order to determine any issues associated with the finish of the surface, warping and accuracy.

In the video above a Tractus3D printer is subjected to the test. The 3DBenchy (from bow to stern measures 60 mm) was printed on our smallest 3D printer, the T650. During printing we did not experience warping or bridging difficulties or any other of the aforementioned possible problems. It took less than 2 hours to complete the 3D print and pass the test!

How the 3D printer resolution can affect the outcome

Just like any other type of printing, the type that you use can affect the final outcome of the print job. This is particularly true for 3D printing and so, you can see just why it is important to consider the 3D printer resolution as part of the decision making process.

When it comes to industrial 3D printers, as they evolve, the desire to printer larger objects will grow, and with this will come an increase in the need for the quality. For large objects, there might not always be a need for that level of resolution but in the case of small or detailed objects such as those that have interlocking or connecting parts, accuracy is vital and so, high resolution is an absolute must.

For those printers that have a lower 3D printer resolution, they will print thicker and so, in those particular objects that have a curve, they edges will be rougher and will have a stepped appearance to it. As the thickness of each layer increases, the step between them increases. Thinner layers would give a larger number of smaller steps, making the curve appear smoother.

In the same way as those objects that have curves, when 3D printing objects that have angles horizontally, the number of steps in the printed object will be determined by the 3D printer resolution. If the 3D printer resolution is set to 200 microns and we want to print 2mm height over a distance of 10 cm, it would mean we need 10 layers in order to achieve the desired height and there will be a layer thickness of 1 cm. However, if printed at 100 microns, it would mean that there would be 20 layers used to create the height of 2mm and that would mean 0.5mm step between each layer and a far smoother surface delivering a better-looking acute angle.

How high resolution is achieved

The first thing about ensuring that high resolution is achieved is down to the ability to take care of the filaments in the correct way. The whole printing process is influenced by the filament and so, it is important that great care is taken over it. The filament has to be correctly wound onto the spool and it is crucial that the temperature is set correct for a heated platform to prevent the objects from sticking to it. An example of this would be ABS which requires a temperature of 100 degree Celsius while PLA only requires a temperature of 60 degrees Celsius.

As touched upon already, the quality in 3D printed objects as well as the resolution will often come down to the temperature of the extruder or the heated platform. Of course, every material will come with a desired extrusion temperature such as ABS which has the most successful melting point at around 240 degrees Celsius. This can vary depending on the manufacturer so it worth taking that into consideration.

Where complex and highly detailed objects are being printed with a high 3D printer resolution, it is crucial that rafts and support structures are used. The key to getting this right is to ensure that the correct thickness is set for the raft, the right distance between the object and the support and the density. However, the denser the support is, the more difficult it can be to remove once the print job has been completed.

The software that is used can also play a part on the final outcome and quality of the 3D print. Different programs can cause better or less adjoining structures and that can have a significant impact on the overall quality of the final print.

The layer height is extremely influential on the quality of 3D prints. Often, standard 3D printing heights are set between 0.1 and 0.3 mm but with the correct nozzle and the right filament, it is possible to increase the height range to 0.05 to 0.35mm. It is worth remembering that the layer height should not be more than the diameter of the nozzle and less than that of half the path width. The lower the layer, the easier it is to create a 3D print that is detailed and accurate with fewer visible layers.

The speed of the 3D printer and print job can have a significant impact on the quality and resolution of the final object in FDM printing. When the print job is carried out in more time it means better finishes on corners or edges. Most filaments will also adhere better and have more time to cool down.

Whether you are opting to print with one or two material extruders, retraction is a crucial part of the process. This is down to the fact that it is responsible for retracting the filament when it is not in use. If the speed and distance of retraction is increased then this can prevent the filament from blobbing on the object as well as prevent any unintentional mixing. It will also mean that filament does not hang from the nozzle. In this case when the extruder moves over the object, it does not leave behind thin hairs of plastic on the printed object.

When resolution is not important

Obviously, design engineers want to achieve the very best printing results and that means that they should consider everything to achieve this. However, not every situation requires a high resolution finish. This is down to the part geometries, the parts that are being produced and how they will be used. In some cases, a high resolution is great but where there are time constraints and less of a requirement to print in high resolution then less care or concern can be taken to the final product. Of course, cost can also play a part in this, particularly where costs need to be kept to a minimum as this can mean that low quality resolution objects can be created without any concerns.

When designing exquisite models for FDM 3D printing, you want them to be as detailed as possible so that you can truly see the expertise put into it. With a 3D printer resolution of 0,01 millimeter (10 microns) on the XY-axis and a resolution 0,05 millimeter (50 microns) on the Z-axis, the Tractus3D DESK printers can print even the finest details. When your objects do not require such detail, you can print at a lower resolution up to 1000 micron.

In the end, Tractus3D systems are capable of the 3D printer resolution we say they can. It is up to the user to make sure they choose the right material for the endproduct. We choose to not set you free into the wild when you buy our industrial 3D printers. We will advise you on what is and is not possible before you purchase our product, so you can get the most out of your printer. This is why our industrial 3D printers have profiles of all the materials, so you know which settings are right for each material. With the help of these profiles, the printer automatically chooses the right temperature and accounts for things such as shrinkage. As a wise man once said: with a great 3D printer, comes great responsibility. 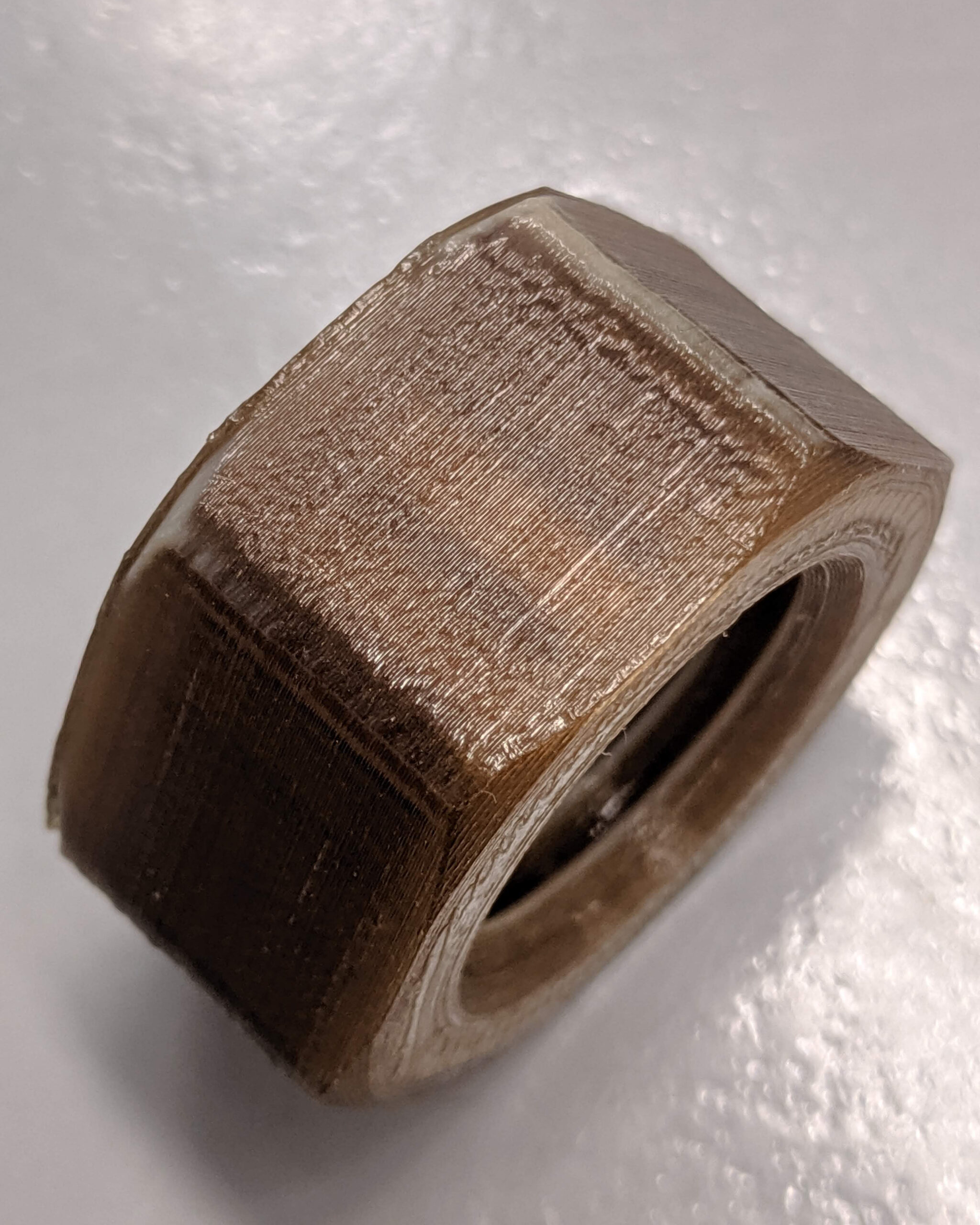