Consumption of 1 liter fuel per 570 km

Last Friday the HAN Eco-marathon has taken place at the Midland Circuit Lelystad (Netherlands). It was the ultimate test for the Shell Eco-marathon Europe 2018, which is held 5 – 7 July in London. Student teams have designed and built vehicles with the aim to drive as economically as possible.

The Shell Eco-marathon challenges student teams around the world to design, build and test driveable ultra-energy-efficient vehicles. The goal is to cover an x number of meters within a specified time and use as little energy as possible. The HAN Hydromotive team from the Netherlands will also participate with their own vehicle. This team of students from the HAN University of Applied Sciences are studying Automotive. To develop the car the team used a Tractus3D printer for prototyping and producing particular parts. The HAN Eco-marathon was a good test case, despite the ongoing rain, which had its influence on the number of rounds driven. The students are now working hard to have the best possible vehicle ready for the event in London.

City car of the future

In 2016 the HAN Hydromotive team achieved a consumption of 1: 570 km / l. The aim is to crush this outcome by achieving an even better result at the Shell Eco-marathon 2018. Thanks to all the effort put into the development of the vehicle, the team is confident that they will succeed. According to Kevin Bonke, Team Manager, they have made a light and aerodynamic vehicle that contains many new technologies, which will help them to reach their goals and hopefully finish first in the UrbanConcept class. In this class HAN Hydromotive produces the city car of the future, which is legal to drive in public space.

The HAN Hydromotive team 3D printed various objects to add to the vehicle so the overall weight stays low, for example trays to store the printed circuit boards (PCB) and other enclosures for electronics. They achieved large cost savings through the use of the 3D printer. ‘’Instead of buying automotive parts we can 3D print it ourselves. The material costs for a single print are below 1 euro, while otherwise the purchase would cost dozens of euros. Especially when it comes to customized designs, investing in a 3D printer is a low cost solution,’’ explains Hein Lucassen, Engineer Brakes & Suspension at HAN Hydromotive.

HAN Hydromotive accelerated the development time of the car as well. The team is able to make the parts quicker as they are not dependent on other people or companies. When a design is ready they can immediately manufacture the part by 3D printing it. When a part does not meet their expectations, they can alter the design and print it again within a short amount of time.

About the Shell Eco-marathon 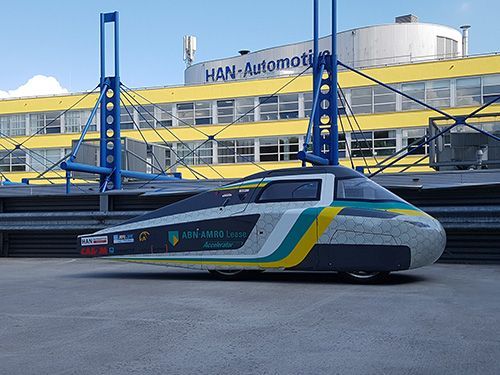